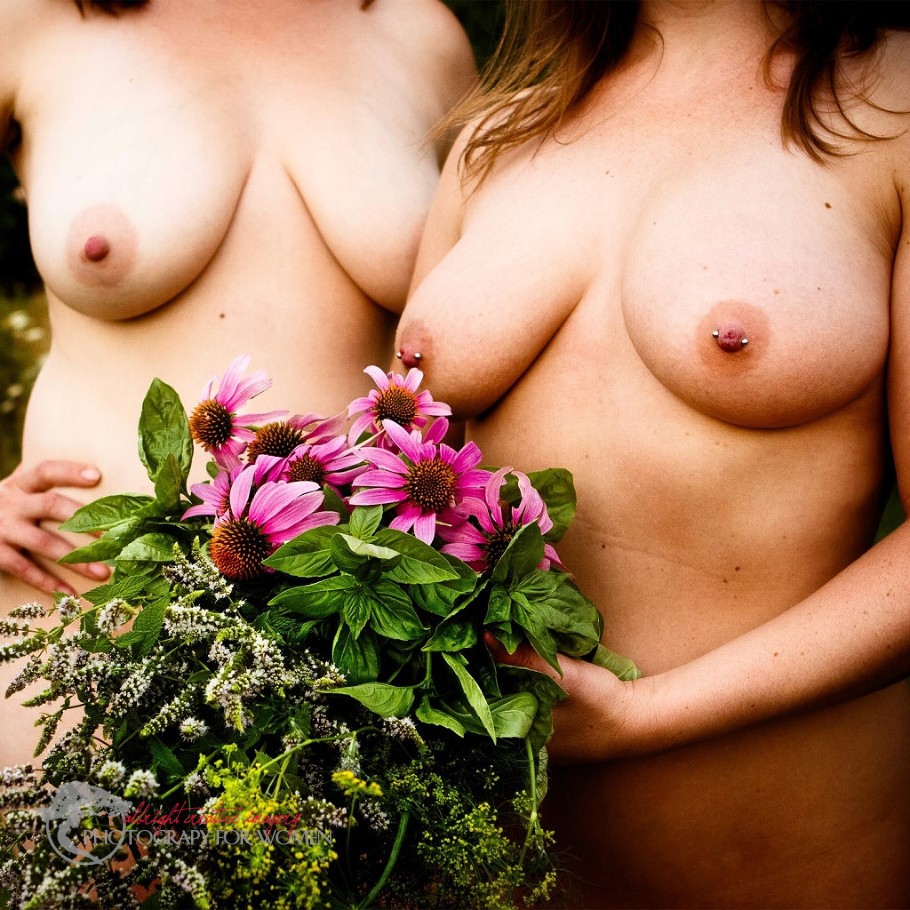 A:When we came out to do this shoot it was kind of awkward  for me. In the end it was a good experience but i was kind of terrified. My sister and I are so close. We are best friends but we don’t ever hang out naked. Not that many people do but I don’t think we’d seen each other naked since we were kids.  I thought it  was interesting that  I felt more comfortable being around Joe, who I didn’t know, than i was being naked around my own sister. I think I felt really vulnerable.

M: I felt a little uncomfortable around my sister when we were naked for the photo together. It was just a little awkward, but I had posed naked for Koren before and by then end it wasn’t so strange.  In general it is easier for me to be naked around people I don’t know also. I can walk around naked in front of a doctor or midwife but it would be really weird to walk around say someone like  our mom naked. We grew up in a fairly conservative family. We’ve never even seen mom in a swimming suit.

A: Our parents are definitely not so cool with nudity. I remember the first time I was embarrassed  to be naked. I was maybe 6. We grew up out in the country so i did run around naked quite a bit. I remember this one time mom had friends over and she told me ‘go put on clothes’ and it really made an impression on me because it was the first time I realized it was inappropriate to be naked. I think I picked up on mom’s lack of self confidence. I wish mom would talk about these issues more.

M: Yeah, mom was really self conscious about her body. She had big boobs and I think she struggled with that. I think I rebelled against our parent’s prudish ways for awhile. I showed my boobs off at parties. I would wear clothes that were revealing. I feel like I never want to be the mom that doesn’t  take her kids swimming because i don’t want to be in a swimsuit but there have been times that I feel exactly that. I think that’s how mom was. Anytime I feel like that I plan on getting naked with Koren. I think we all have a concept of what our body should look like and when it doesn’t it effects us. I can think other people are absolutely gorgeous and they have the same issues about their bodies that I do.

M: Growing up I didn’t have body issues around my boobs. I was more concerned with my legs. When i did get boobs I got boobs. They were never the giant ones that were made fun of or totally flat chested but they were there and they were nice. I was always fine with getting boobs and was never bashful or self conscious.

A: I got a lot of positive attention for my boobs once I got them. But like my sister I hate my legs. I never had issues with my boobs. I think the attention that I got was positive attention. I actually think it was kind of sad that I craved that kind of attention from boys as much as I did. I never got made fun of. I kind of liked boys my age making comments like hey she’s got big tits. For me liking the attention I got for my boobs was a way of rebelling a little bit against my parents and how uptight they were.

M: Yeah, I would wear lower cut shirts and things to show off my boobs as a way of rebelling against how uptight our parents were. It was my body and they couldn’t control what I did with it once I was a certain age.  Once I got older, gained weight, had kids, my boobs  changed and i find myself being more self conscious now.  I used to love my boobs a lot more than I do now. I think that breast-feeding has pulled them down. They don’t look like what I remember them looking like. But, I don’t hate them. I”ll keep them around. After breastfeeding and realizing that they have another purpose other than looking cute in a bikini I have more respect for my breasts.

A: I am pretty good with how my breasts are in general. I feel like they are a little saggier than I would like. I wish they were more symmetrical. Even still I think my boobs are my favorite part of my body.

A: posing naked together was kind of funny because it was so out of character for me. At the end I felt it was very liberating and nice and it made me wonder  why I was so uncomfortable to be naked around my sister.

M: maybe the ice is broken now and we will be comfortable being naked around each other.

A: I love the picture. For me I really valued the experience as well as how the picture turned out.  Still I  wasn’t happy with how I look though. I looked different in the photo than I thought I did. It was very strange for me.

M: On the way to the shoot we got lost and for awhile my sister was really hoping we wouldn’t find the place and we just weren’t going to do this.

A: Ultimately I was so glad we did this though. It was so fun to tell my friends I’m in a calendar and I’m going to be in a boob book. That was great! A lot of people wouldn’t have the courage to pose for something like this. I’m really proud of myself for doing it. I think you and Joe made the experience positive. I was so nervous. I had never met you or him. I didn’t know if he was going to be creepy. But you both gave such positive encouragement during the photo shoot. It was quite an ego boost. That made it really fun.

M: I don’t know many people that I can say I actually look forward to hanging out naked with. It’s a very short list. Like maybe Koren and Joe and my husband and he is only a maybe.

A:I’m really excited that we will have a special page in the book.