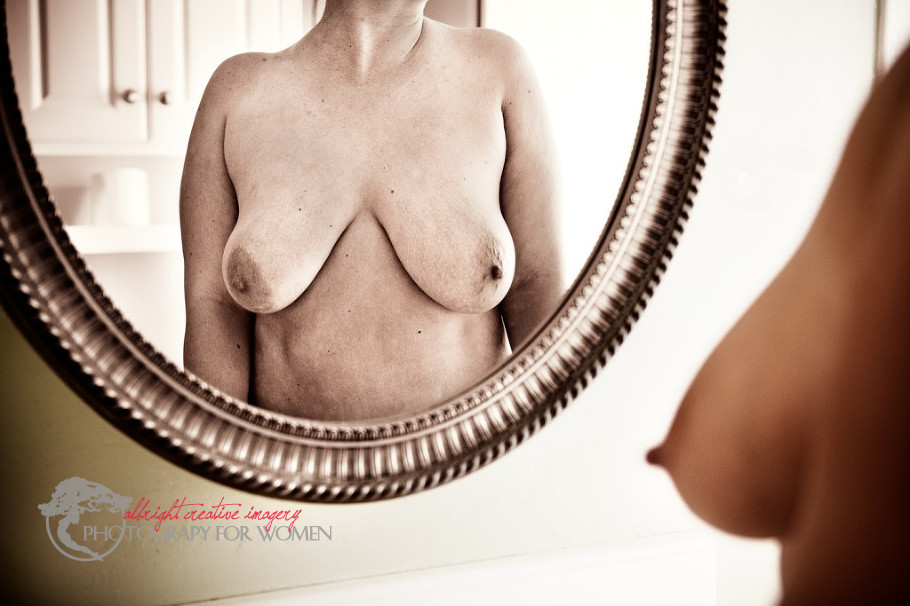 I was five foot six, as thin as a board, and weighed 86 pounds at my high school graduation because I had rapid cycling anorexia and bulimia. So when I graduated I was obviously very tiny and flat as a board. I had my prom dress taken in four times before prom because I just kept getting thinner and thinner. I did all those chest exercises they tell you to do, I looked in the back of all the magazines for help… I wanted to have a shape. I wanted to have curves, I just didn’t want to be fat.

After I had my two kids. I weighed more than I ever had. I had all kinds of curves, and I had giant boobs. I should have been so happy, but I still had those old mental pictures of what I should look like. When I went back and looked at those 86 pound pictures, there was still that thought, “god, if I could loose just ten more pounds”. I still struggled with that and thought, maybe if I just did it for four months I could be on top of it. I could loose the weight. I had it all under control back then, I could stop.

Changing the internal dialogue is the hardest part. We are all intelligent logical people. I tell my friends, “You are not the size in the back of your jeans”. Logically you can think that, but, then eventually you’re alone and you look in the mirror. All you do is beat yourself up. You say things to yourself that you would never ever say to anyone, not even somebody you don’t like.

When I started toying with those thoughts again, I actually went back into an intense body dysmorphia therapy once a week at a place that was specifically for women with eating disorders. What really put me into therapy was my husband. He looked at me and said, “I know what you say about yourself out loud and I have a feeling you are hiding an awful lot. And if you are only sharing with me five or ten percent of what’s going on in your head, then your head is poison. I can’t see you self destruct like this. Get therapy or I’m out”. It was very powerful and I literally called the next day. He was absolutely right.

I did intense therapy and worked very hard to overcome all those criticisms that we live with for so long. I felt very healthy toward the end and, as a gift to myself, I thought I would go get boudoir pictures done. So, I had a friend who is a photographer take pictures of me. People would always tell me, “Oh, shut up, you’re skinny”, “You’re fine”, “You’re pretty, you’re beautiful.” I didn’t believe them, friends have to tell you that stuff. But the first time I looked at the pictures, I realized, “this is what other people see when they look at me”. “I am pretty and I actually do have nice boobs, and a nice but and hips”. My curves are good. So, one thing lead to another and I turned into a giant monster. I now do burlesque! I actually take off my clothes and people paid money to see it! That’s awesome!